Black Light as an Examination Tool 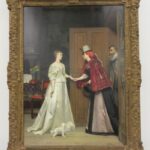 This oil painting on board by Florent Willems (1823-1905) was brought in for evaluation and treatment. Examination of the painting’s surface under normal and raking light exposed surface dirt, frame abrasions, fine craquelure, areas of blooming, and unevenness of varnish layers. To reveal a different aspect of the painting’s condition, it was also viewed under black light.

Black light is used as an examination technique to gain additional information about a painting’s structure and any previous restoration.

Under black light, several darkened areas are visible throughout and suggest that this painting was retouched at two different times since its creation. While it is not uncommon for a painting of this period to have been previously restored, this information is important to consider when determining options for treatment.

Manage Cookie Consent
To provide the best experiences, we use technologies like cookies to store and/or access device information. Consenting to these technologies will allow us to process data such as browsing behavior or unique IDs on this site. Not consenting or withdrawing consent, may adversely affect certain features and functions.
Manage options Manage services Manage vendors Read more about these purposes
View preferences
{title} {title} {title}